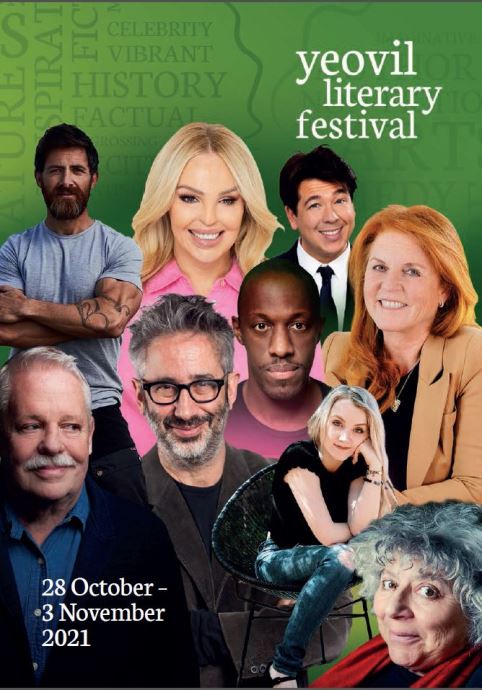 YEOVIL LITERARY FESTIVAL: BACK WITH A STAR-STUDDED LINE-UP FOR 2021

Tickets for the 2021 Yeovil Literary Festival are now on sale, with a star-studded line up of writers, celebrities and thinkers announced. The 2021 festival runs from Thursday 28 October to Wednesday 3 November, with over 50 events taking place across multiple venues.

Following the scaled-back festival last year as a result of the coronavirus pandemic and subsequent national lockdowns and restrictions, The Octagon Theatre and Westlands Entertainment Venue has once again joined forces for Yeovil Literary Festival with Waterstones, Yeovil, the Yeovil Community Arts Association and Somerset Libraries to bring you names that will inspire and leave you wanting to hear more.

This year’s line-up boasts some exceptional names, including royalty joining us in the form of Sarah, Duchess Of York discussing her first novel for adults. We also welcome comedy-royalty, with Michael McIntyre taking to the stage at a post-festival event to talk about the highs and lows of his rise to the top and desperate attempts to stay there.

Alongside royalty, well-known literary figures, comedians and emerging writers will be providing fascinating insights and extracts from their current books and bringing inspiration to South Somerset. With too many names to quote, we bring you just some of the highlights to look forward to:

Our pre-festival event on Sunday 17 October welcomes Dr Richard Shepherd, forensic pathologist. Dr Shepherd has taken to the road for the first time ever on a theatre tour which promises to be utterly fascinating and his book ‘Unnatural Causes’ gives insight of not only the cases and bodies that have haunted Dr Shepherd the most, but also how to live a life steeped in death. He has performed over 23,000 autopsies including some of the most high-profile cases of recent times; the Hungerford Massacre, the Princess Diana inquiry, and 9/11.

Thursday 28 October: Author, illustrator and draw along genius Rob Biddulph discusses his journey from budding artist to award-winning author and Guinness World Record holder, bringing his new title ‘Monsters and Magic’ to the Octagon Auditorium. Evanna Lynch, best known for her casting as Luna Lovegood in the Harry Potter films, discusses her memoir ‘The Opposite of Butterfly Hunting’ in a conversation that will bring out stories of her bitter struggle between pursuing perfection and the desire to fully and fearlessly embrace her creativity.

Friday 29 October: TV presenter and charity campaigner Katie Piper brings her inspiring book ‘A Little Bit of Faith’ to the festival and will be encouraging the audience to see that heartbreak and hardship can become fuel for your fight. Sunday Times bestselling author and international sensation, Clare Mackintosh, will be talking about her new novel ‘Hostage’, a show-stopping take on the classic locked-room thriller.

Saturday 30 October: David Baddiel will entertain the audience when he will be talking about his new book ‘(The Boy Who Got) Accidentally Famous’ and the inspiration behind his award-winning books, plus why he loves writing for children. During the midst of the coronavirus pandemic, ITV’s Dr Hilary Jones launched his first book ‘Frontline’ in his epic historical series and will be discussing his foray in to fiction. Long-standing Yeovil Literary Festival attendee, Lucy Worsley, shares secrets and explores the dark story of our fascination with murder and how crime has turned into art.

Sunday 31 October: Number one bestselling historian, Max Hastings, provides a thrilling narrative of ‘Operation Pedestal’, a little-known but crucial naval battle. With over twenty-seven books, Max brings a wealth of experience to share with the audience. Giles Terera draws from his journal kept throughout his year-plus-long process of preparation, rehearsal and performance for the smash-hit musical Hamilton in London’s West End. His performances in this musical helped Giles to win the Oliver Award for Best Actor in a Musical for his portrayal of Aaron Burr; this account is honest, intimate, thrilling and not to be missed. Dr Irving Finkel, author and Assistant Keeper in the Department of the Middle East at the British Museum, explores a subject that has fascinated him since he was at school - Ghosts.

Monday 1 November: Ben Miller – actor, director, comedian and author – talks about his new book ‘Diary Of A Christmas Elf’; a funny and heart-warming story about the true meaning of gift giving. We also see Armistead Maupin at The Octagon Theatre recounting his favourite tales from the past four decades and offering his own engaging observations on society and the world we inhabit.

Tuesday 2 November: With the appearance of Sara, Duchess Of York discussing ‘Her Heart for a Compass’, her first novel for adults, we are also delighted to be joined by BAFTA-winning actor, voice of everything from Monkey to the Cadbury’s Caramel Rabbit, creator of unforgettable characters such as Lady Whiteadder, Miriam Margolyes OBE. Miriam will be giving a warm and honest account of her life from her new book ‘This Much is True’. Lucy Beautmont, TV’s award-winning comedy mum and one half of the popular Meet The Richardsons, will be discussing her hilarious literary debut on the trials and tribulations of motherhood.

Wednesday 3 November: We see the Yeovil Literary Festival wrapped up with names including Michael Portillo, detailing events from his book ‘Life: A Game of Two Halves’ and Phil Wang, one of the UK’s most exciting stand-up comedians, who will be reflecting on his experiences as a Euroasian man in the West and in the East from his book ‘Sidesplitter’.

At our post-festival event on Tuesday 9 November, we welcome the honest and hilarious Michael McIntyre who lays bare the highs and lows of his rise to the top and desperate attempts to stay there. All shared in his book ‘A Funny Life’.

Liz Pike from Yeovil Community Arts Association and one of the Festival Directors, said: “Building on years of success with the Yeovil Literary Festival, we are delighted to offer such a high-profile programme of names for all of us to enjoy. It’s been a difficult time for everyone missing live performances, however this year’s festival offers a way to get back to normal as we welcome to Yeovil some of the biggest literary figures, comedians and emerging writers. Special thanks to the sponsors who have helped us to be able to offer such an exciting event.”

Take advantage of our ‘Discover Events’ whereby when purchasing a ticket to any Yeovil Literary Festival event taking place in The Octagon Auditorium or Westlands Ballroom, you will be allocated a Discover Event voucher (one voucher per purchased ticket). This voucher can be exchanged for a complimentary ticket to one of our Discover Events.

For the full Yeovil Literary Festival 2021 programme or to book tickets visit YEOVIL LITERARY FESTIVAL or call The Octagon Theatre Box Office on 01935 422884.