Discover more about our collections by scrolling to this section below.  To give you a fascinating taster too, please do take a look at the gallery at the bottom of the page.

Our friendly and helpful Heritage team provide lectures, resources and advice for community groups. We are also happy to organise tours, individual viewings and access for researchers.

Staff are actively supported by a team of knowledgeable volunteers. We have an active group of volunteers, helping us to manage the collection and helping with outreach activities. Any new volunteering opportunities are advertised locally. See our volunteering information section for more details.

The heritage calendar includes a series of photographs and associated items selected from the extensive collection. Click on the button to download your free copy: South Somerset Heritage Collection Calendar 2022

Do not hesitate to contact us for more information.

Donate to make a difference:

If you have enjoyed a visit to the South Somerset Heritage Collection and would like to contribute to help us care for the objects and photographs, please use the donate button to give a donation of your choosing. Your contribution will go towards archival quality equipment to help us maintain the collection for future generations and enable us to plan and deliver our community displays, activities and Pop Up Museums to connect people with their stories.

Thank you, your contributions really make a difference.

The Costume & Textile collection includes a significant selection of items, ranging from a child’s sampler to Swayne Harbin’s wedding coat, from the Harbin family of Newton Surmaville House, near Yeovil. Pictured left to right, Swayne Harbin's wedding coat and a hat believed to have been worn by Queen Victoria.

Gloves made by local manufacturers like Clothier & Giles and Ricketts plus formal, driving and fur backed gloves. Glove designs on acetate are also available to view on request. Glove tools include examples of the Donkey patented in Stoke sub Hamdon in 1807. From left to right a wooden glove finger stretcher and a wooden hand to display gloves, plus gloves from the South Somerset Heritage Collection.

We care for around 50 paintings and artworks, plus maps, posters and local advertising. These range from formal portraits of gloving factory owners and their wives to more contemporary works by Martock-based artist, Arlie Panting and ‘pop artist’ Stephen Wilmot ‘Wilf.’ One of the star items is the Angel Inn Panel from 1603, shown below which came from the Angel Inn in Yeovil, now the site of the NatWest Bank. Alongside is a painting of a steam locomotive at Stoford pulling a two-coach train from Yeovil Junction to Pen Mill Station, otherwise known as a ‘push and pull’  Painted by H. Ball in 1971.

The Petter / Westland story is well represented by a Petter and Edgar Cheese Press, shown below, the engine of the 1895 Horseless Carriage, an example of the Nautilus Grate and a Petometer adding machine, an early form of calculator. We also have a Linotype typesetting machine last used by the Western Gazette Newspaper in 1984 shown alongside the cheese press and examples of objects and photographs related to St. Ivel, makers of lactic cheese up until 2000.

This forms an important part of the collection ranging from a Neolithic hand axe found on Wyndham Hill, shown below to a notable collection of well documented Roman coins collected by Gregory Stevens-Cox from Ilchester, an example of which is shown alongside the hand axe.

Star ceramic items are the Yeovil Riot Jugs from 1831 and the St. Ivel Monks cheese serving dish, shown below. Yeovil Goss China and commemorative pieces are also of interest. An example from the Pinney Glass collection is also shown.

One of the most significant single donations came when renowned local businessman and photographer, Henry Stiby donated his collection of important firearms and pistols in the 1930s. Other notable items include the commemorative sword presented to Sir Charles Knight Pearson of Thorne Coffin by the people of Yeovil in 1837 for outstanding military leadership. A close up of a firearm stock and example of the Henry Stiby collection are shown. 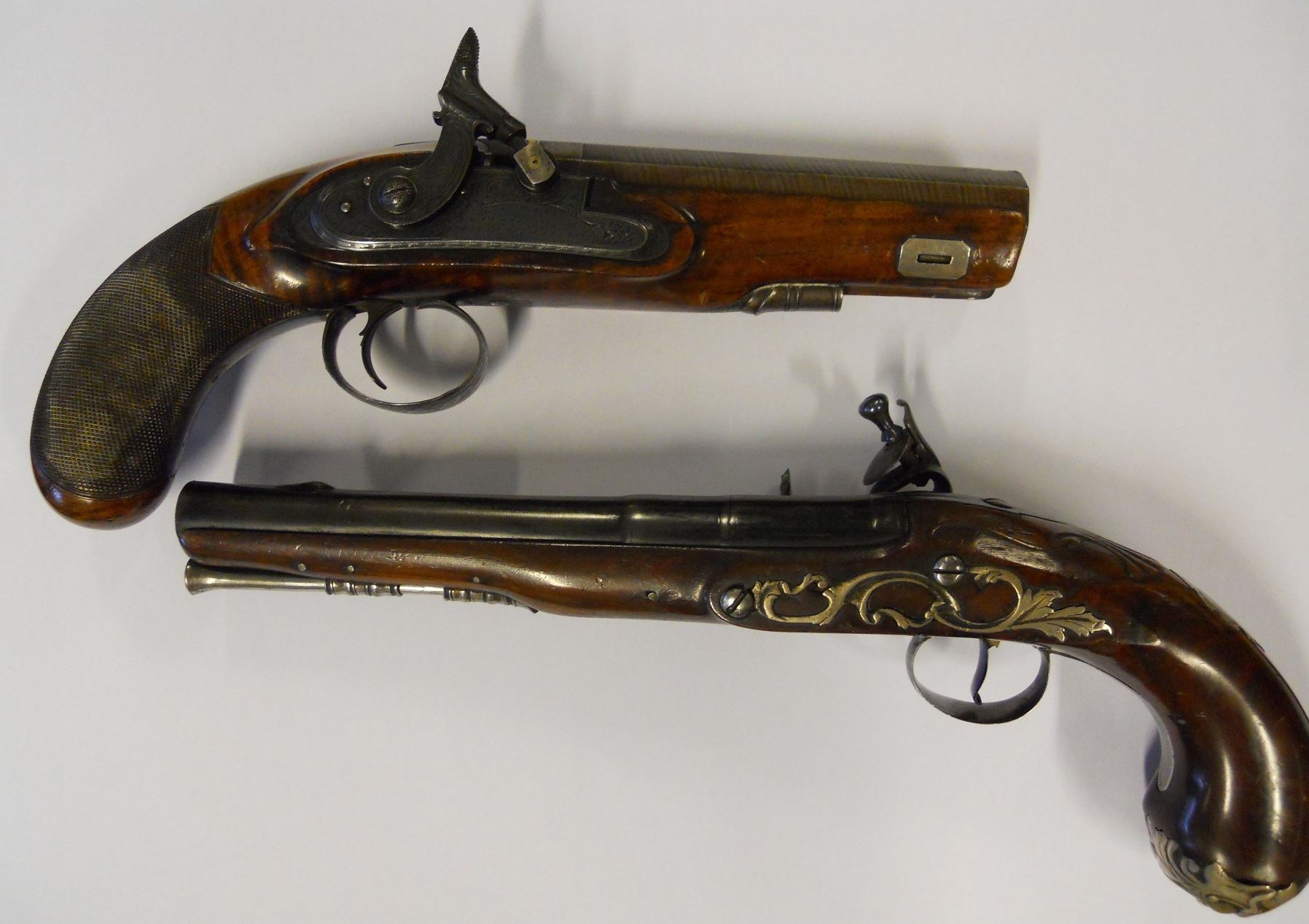 In addition to Roman coins, we also care for First and Second World War Medals, plus a notable selection of pub and trade tokens. A tool deposit token for James B Petter & Sons is shown with a trade token of Brett & Cayme, cloth manufacturers in Yeovil in 1797.

We would be delighted for you to visit the collection but if you are unable to, do browse some of the wonderful pleces in the Look Around Section at the bottom of the page.

Please call us on 01935 462855 or email us on heritage.services@southsomerset.gov.uk to arrange a visit.

All you need to know to enjoy your visit

Please note the following useful information for charges that apply when using our services:

The Collection is available for public viewing by bookable prior appointment, via email or telephone. Thank you.

Limited parking is available on-site. Details and directions will be provided when you make your appointment.
Facilities are available to visitors only. A disabled toilet is available.
As we are primarily a storage facility we regret disabled access is ground floor only.

A fascinating 3.3 mile walk into the past, taking in the monuments and sites of the First World War at home plus objects from the collection.

An overview of the collection, services, fees and charges.

This provides an overview of the costume collection with notable examples

Check out to see if you can help

We have an active group of volunteers that help to complete the following tasks and activities:

Find out more about group visits

We help  a number of groups in the local community.  We see groups like the U3A and local history groups on bookable tours. If the group is from Yeovil and South Somerset we try and have a relevant object from the collection for them to see during their visit.

We also have a selection of loans boxes. Community groups can borrow these for a small charge to provide an additional element at their regular meetings. Traditional toys and games have proven popular! Please contact us for details of the loans boxes available.

Family History is one of our regular research requests. We have a link with the Somerset & Dorset Family History Society based in Yeovil and work together to assist with enquiries. For more information about this organisation, you can visit their website here

“Following the death of Her Majesty Queen Elizabeth II, we are sorry to announce that we will not be proceeding with our event for Heritage ...
Read More

Celebrating the Festival of Archaeology 16th – 31st July 2022 South Somerset Heritage Collection is delighted to be participating in this...
Read More