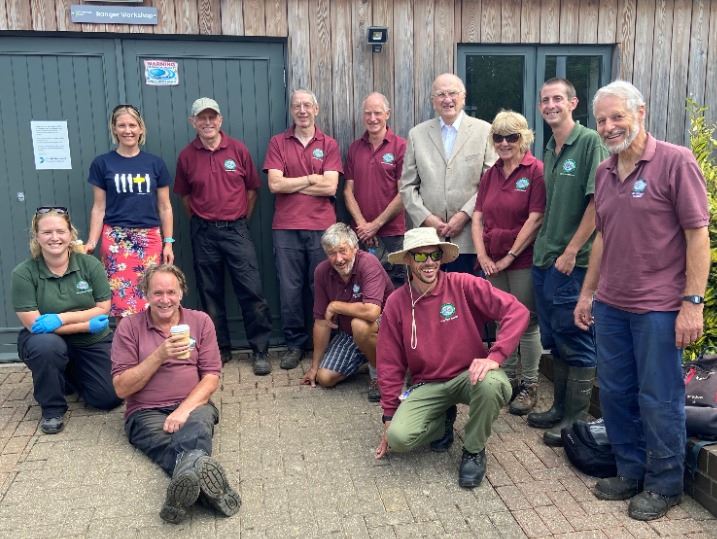 Volunteer Ranger, Robin Mackay (pictured centre of photo in pale coloured coat), has retired from the practical conservation volunteer team at Yeovil Country Park after 15 years and at the grand age of 90 years young!

Robin started volunteering in 2006 after seeing posters in Ninesprings advertising a new volunteer group that was starting. He joined then ranger, Rachael Whaites, as the first volunteer in the group and watched as the team steadily increased in numbers over the years.

Robin fondly remembers days working on steep slopes in Ninesprings, clearing laurel, planting trees and helping at many public events over the years, including the hugely popular Halloween Trail.

Robin's support and determination was instrumental in gaining support for the creation of the Ninesprings Cafe which saw the rangers move from a shipping container work base into more suitable accommodation with toilets and running hot water!

Robin was also the first Chairman of the Friends of Yeovil Country Park, after it's formation in 2012 and has helped to gain much funding and support for the country park's projects and events over the years.

Robin says "I have greatly enjoyed my time working with the rangers and fellow volunteers at Yeovil Country Park. They are great friends of mine and I will miss working with them on a weekly basis'.

He will be greatly missed on a Thursday.